The show begins with Bondita asking, do you remember what you said to me that you would carry me with arms and carry me with you. Bondita holds her. He escapes. Batuk says”No, sorry, I’m not able to accomplish this. She inquires about what the reason. He says you need rest. She wonders why I feel as if I touched someone this morning when I was touched by Anirudh. Trilochan and Batuk cry for Anirudh. Trilochan says that we did not receive the body of his deceased however we must make some rituals to ensure his peace of soul. Batuk sits on his lap and weeps. Bondita asks where Anirudh’s photo disappear. She wants to know Bihari. Bihari replies that he doesn’t know. Shashwati affirms that Trilochan is taking it with him. I’ve seen it. Bondita is there to look. Batuk performs the rituals.

Trilochan requests him to place the final chadava. They hug and cry. Sampoorna interrupts Bondita and asks her if she’s getting Trilochan. Bondita tells me I needed to ask him what made him take Anirudh’s photo. Sampoorna says he used it to repair the frame. bring me along and we’ll talk. They disappear. Batuk departs at the end of the tunnel. Sampoorna says there’s a lot of changes that happen to a woman as she becomes a mom You and Anirudh need to be aware of this. Bondita says that I feel like everything has changed. Anirudh’s behavior changed and he has become a strange person. Sampoorna believes that maybe he’s concerned after the incident, you both were free from death. Give him some timeand all will be well.

Batuk is at a party. He asks how can I get Bondita suffer through this pain and how can she burn the heart of her into the firethat my own heart burns. He calls and says that I would like all the details regarding Tapur and Tupur the past as well as the present and everything else. Bondita is waiting for Anirudh. Trilochan appears to her. She tells him that Anirudh hasn’t arrived until this moment. Trilochan says that he was with me and told me there was some imp work to do, so you take a nap. He leaves. Bondita claims that Anirudh is keeping his family time and work apart, and why does he do this? I notice his behavior is different. She suggests that I don’t need to be thinking about it too much. Trilochan remains down. Batuk receives a call. Bondita notices the picture of Anirudh and is able to hug it. She requests him to come and she’s missing him. Batuk smiles and thanks for the visit. He says that he has learned useful information regarding Tapur and Tupur and I’ll use this in a perfect way. He is invited to dance with an attractive girl. He gets drunk. It’s a morningand Bondita gets up. She believes that Anirudh will be coming soon. I’ll get dressed and perform it. Durga Maa Puja. She fixes the photo. Batuk returns home and welcomes Trilochan. Trilochan wants to know where you go to at night? it’s not Italy, Bondita will doubt your claims, so convince her by showing the love of your life. Bondita believes that she is Anirudh. Batuk comes. She has an angry face. He apologizes. She writes her apology on his hands and also on the slate that hangs over his shoulders.

She says that I’ve sincerely forgiven you. Then why did you go in the dark for the whole night. He claims it’s a tough case, the culprit is extremely smart, she killed someone, and everyone thinks that she’s innocent. He says that he is risky. He claims that I’ve entrapped her or him and she isn’t aware of what to do, and I’ll catch her when the time is right. She is very clever, could you fill in the sindoor my maang. She gets sindoor. She asks, why are you thinking that you should do this. He replies that he in reality… He claims you didn’t remember that you had promised to fill my maang. I am doubting your words today. He gets the istoor box. The woman says that you must open it in this way. He says, I know. His cough is accompanied by a drop of the istoor box. She gets worried.

He says sorry Bondita I’ve have just sneezed. I will take another. She says no, it’s abshagun. She believes it’s a superstition and she says he’ll scold me. She assures me that it’s not a problem I’ll get a new sindoor. He believes that you don’t merit Anirudh’s istoor, so look at what I’m doing. He receives a call. The caller asks if this is the home of a barrister Bondita. He answers with a wrong number, and hangs up. He calls again and states that barrister Bondita isn’t staying here. He is furious. Somnath gets into Tapur. They pick up the pieces. Somnath goes away. Tapur smiles. Batuk is thinking about my next move, you took Anirudh from me. I’ll take your family members from you. 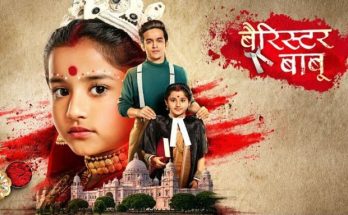