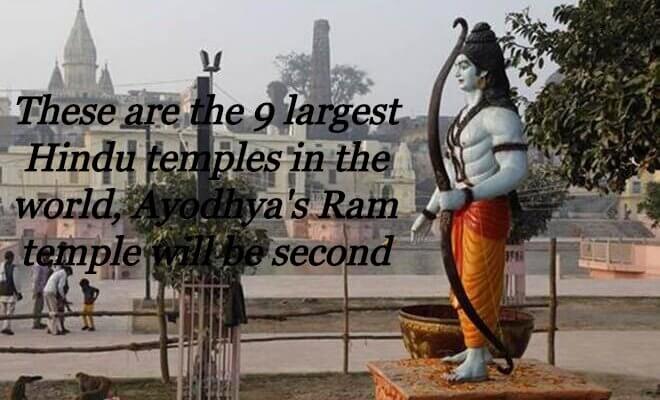 After the long legal battle, the second largest Hindu temple in the world is going to be ready in Ayodhya, the “Sri Ram Janmabhoomi” site of Uttar Pradesh. All preparations have been completed in this regard. On August 5, 2020, the first brick of the foundation will be laid to start construction of the temple in the hands of Prime Minister “Narendra Modi”.

It is pleasant that earlier on 11 February 2018, PM Modi laid the foundation of another Hindu temple, which is to be completed this year. The special thing is that this temple will be the largest Hindu temple in the world. Explain that the foundation stone of the Hindu temple was laid in Abu Dhabi, the capital of the United Arab Emirates.

This temple is being prepared by Indian craftsmen, which was to be completed by 2020 this year, But due to the corona transition period, it may take some more time to be fully prepared. However, it is a matter of pride for us that the construction of a temple at such a place is a big thing in itself, where all the citizens except the workers are of Muslim religion.

Srirangnath Temple, located in Trichy, Tamil Nadu, is the second largest temple in the world. It is the largest Vishnu temple in India, located on an area of ??about 6,31,000 sqm. It is so vast that an entire city is inhabited in its premises.

Akshardham Temple, built in the modern period in the capital Delhi, is the largest temple of the Swaminarayan sect. It is a famous tourist destination, spread over an area of ??about 2,40,000 sqm. It is crowded with tourists throughout the year.

The ‘Chidambaram Temple’ located in Chidambaram, Tamil Nadu, is a Shiva temple and is huge. It is a famous pilgrimage center. It occupies an area of ??about 160,000 sqm.

Built by Swami Vivekananda, this monastery is situated on the banks of the Hooghly River in Calcutta. Here mother Adyakali is worshiped. It is the fifth largest Hindu shrine in the world. It is spread over an area of ??1,60,000 sqm.

The Brihadeeswarar temple of Thanjavur in Tamil Nadu is also a huge temple. It is a Shiva temple, built about 1000 years ago by King Chola I. It is located in an area of ??about 10,24,00 sqm.

Read more: The story of the amazing Kanak Bhavan of Ayodhya

The temple is located in Tiruvannamalai, Tamil Nadu. This Shiva temple is famous for its many tall pillars. It is spread over 1,01,171 sqm.

Ekambeshwar Temple located in a place called Kanchipuram in southern India is also one of the largest temples in the world. It is dedicated to Lord Shiva. The area of ??this Shiva temple is about 92,860 sqm. It is one of the five Mahashiva temples and Panchabhuta sites.

This famous Shiva temple located at Trichy in Tamil Nadu was built by Raja Kosanganan about 1800 years ago. The area of ??this temple is about 72,800 sqm.