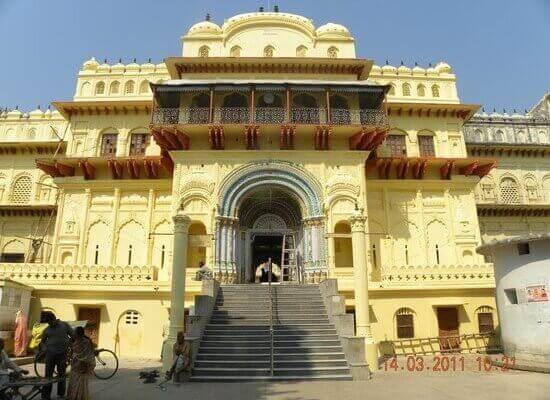 The story of the amazing Kanak Bhavan of Ayodhya, this story is associated with Lord Krishna and Mother Kaikeyi

With the coming of “Shri Ram Janmabhoomi temple” construction started with the arrival of Prime Minister Narendra Modi, preparations are being made for the renovation of one and a half hundred mythological temples of Ramnagar. Sometime in Dwapara Yuga, Lord Krishna also came to Ayodhya to worship Rama, then seeing the mother Padmasana doing penance on a mound here, he built a huge Kanak Bhawan temple there.

It is said that Rani Kaikeyi gave the Kanaka Bhavan to Mata Sita in the face. Over the years, this temple has been constructed and renovated several times. The present temple is built in 1891 by the queen of Orksha. Devotees coming to Ayodhya go to Kanak Bhavan along with Hanumangarhi, Shri Ram Janmabhoomi.

The legend is that in the Treta Yuga, when Shri Ram dissolved Lord Shankar’s bow at the meeting of Maharaja Janaka in Mithila, Janaki put Jayamala on his neck. That night the Lord started thinking that Janakanandini Vaidehi would now go to our Ayodhya. Therefore, there should be a beautiful building for them. There is a story that the moment the wish arose in the mind of God, at the same moment, Queen Kaikeyi saw the divine Kanaka Bhawan with Saket Dham in a dream in Ayodhya.

Maharani Kaikeyi expressed his wish to build a replica of the Kanak Bhavan seen in a dream in Ayodhya from Maharaja Dasaratha.

On the request of Dashrath ji, Shilpi Vishwakarma came to Ayodhya to build Kanak Bhavan. He built the beautiful Kanak Bhavan. Mata Kaikeyi gave the building to her daughter-in-law Sita. After marriage, Ram-Sita started living in this building. Numerous rare gems were embedded in it.

Approximately two thousand years ago, Emperor Vikramaditya restored the couple’s Deities of Sitaram by renovating it there. The huge Kanak Bhavan, built by Maharaj Vikramaditya, remained intact for a thousand years. It was repaired periodically.

Read Also: These are the 9 largest Hindu temples in the world

In the second millennium of its renovation, Ayodhya was invaded by the Yavanas several times, in which almost all the major devas were damaged. Kanak Bhavan was also demolished.

Kanaka Bhavan is the incarnation of Sita-Ram

It is believed that by the time Sri Krishna came to Ayodhya in Dwapar with his patrani Rukmini, Kanak Bhavan had broken into a high mound. Lord Krishna experienced the ultimate bliss on that mound.

He came to know from his divine vision that Kanak Bhavan was organized at this place. Yogeshwar Shri Krishna obtained the ancient Deities of Sri Sitaram from that mound and established them there. Both Deities are unique and unique. As soon as they see him, people get mesmerized and forget about their well-being. In fact, Kanaka Bhavan is the incarnation of Sita-Rama.