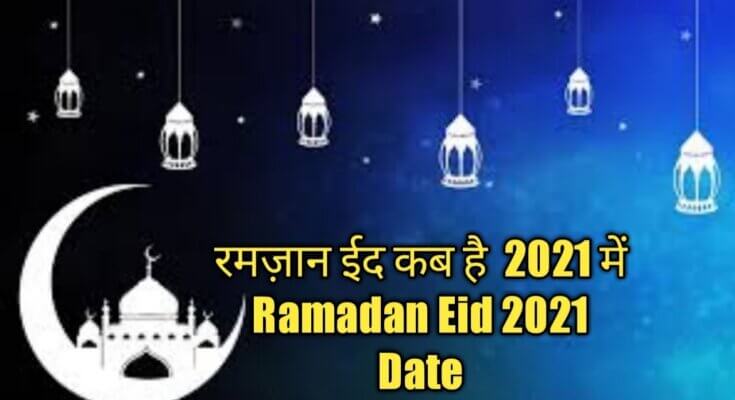 Eid 2021 – Our country India is famous worldwide for its diversity. People of all classes and communities of all religions are respected here. In our country, festivals already associated with all religions have also been celebrated with great pomp. Just like the famous festivals of Hindus are Holi, Deepawali, Raksha Bandhan etc. Similarly, in Muslim or Islam religion, festivals are very important and they are celebrated with great pomp.

One of these festivals is Eid-ul-Fitr, which in common language is called Eid.

Apart from this, this festival is also a symbol of brotherhood. On this day, all the people get hugged and forget each other with hatred or grievance and live in love with each other, so this festival gives the message of brotherly fodder and love in the world.

In this festival, all the people themselves are happy as well as they take full care of the happiness of others and all of them celebrate this festival with great love while thinking about each other. In this festival, all the people thank Allah for all the achievements of their life till date and all that they have is due to Allah, and they offer prayers in community, in which they all pray to Allah. Markets are also decorated like brides on this day and all people get new clothes for themselves and their families.

On this day, people wear new clothes in the morning by performing a collective prayer of fajir. New clothes are put on ‘perfume’ and the cap is worn on the head, after which people go to Idgah or Jama Masjid from their homes to read ‘Namaje Dogana’. On this day, happiness is distributed from house to house, that is, people make many types of dishes in their own homes and all exchange these dishes at each other’s homes.

Read More: Who is the current education minister of India?

On this day mainly siwiyan and sheer are made. Sheer is a dish that is almost like rice pudding, which in Islam is called Sheer. On this festival, everyone distributes sweets and happily forgets differences and celebrate happiness. This is the way this festival is celebrated.

Why Eid Ul-Fitr is celebrated?

Although there are many opinions about celebrating this festival, but according to the Islamic belief which is most prevalent, on this day, Prophet Mohammad Saheb won the battle of Badr.

Since then, this festival started and Muslims from all over the world started celebrating this day with great pomp and show. In fact, this festival of Eid Ul Fitr is a festival of brotherhood and love because people of Muslim community also celebrate this day together with people of other religions and invite them to a feast at their homes and ask Allah for their family and Pray for the well being and salvation of friends. This is the reason why this festival of Eid-ul-Fitr is celebrated with such grandeur.

The festival of Eid-ul-Fitr is very important both religiously and socially. Celebrated after the holy month of Ramadan, this festive festival is celebrated with much fanfare by Muslims all over the world. It is believed that on this day, after Jung-e-Badr in 624, Prophet Mohammad Sahab This festival of Eid Ul Fitr was celebrated for the first time.

Since then, this festival has been celebrated with great fanfare every year by the followers of the Muslim religion. This festival also contributes to the promotion of social unity and brotherhood. This secular form of this festival attracts people of all religions towards this festival. On this day feast is organized by the people of Muslim community at their homes.

The main part of this feast is the special macaroni made on Eid, which is eaten with great fervor by the people. On this day people of other religions are also invited to feast at their homes by the people of the Muslim community. This love behavior of the festival of Eid is the specialty of this festival, which works to increase love and brotherhood in society.

Eid-ul-Azha or Bakra Eid is celebrated about 70 days or two months after the end of the month of Ramadan. It is an Arabic word meaning – Qurbani meaning as the name itself suggests that the goat is called Eid because on this day the goat is offered to Allah by the Muslim community.

The sacrifice of goats on this day is considered a symbol of sacrifice in the religion of Islam. Muslims or people of Islam from all over the world gather in Mecca, Saudi Arabia and celebrate Haj in this month, hence it is called Eid-ul-Azha which is celebrated on this day. In fact it is a part payment of Hajj and the day of Muslim sentiment.

A group of people of all Muslim religions around the world perform Hajj and offer prayers in Mecca. Many Muslim people go to Saudi Arabia on those days of Hajj and join Hajj. This journey is also given special importance in the religion of Islam. All those who are able to undertake this journey, thank God and they get high status. This is how this festival is celebrated in the religion of Islam.

When is Eid-ul-Azha (Bakra Eid) celebrated?

Eid-ul-Azha (Bakra Eid) comes about 70 days after Eid-ul-Fitr (sweet Eid) which is celebrated on the 10th of Dhu-al-Hijja, the 12th month of the Islamic calendar. The festival of Bakrid is celebrated in Jul Hijj, the last month of Hijri. In Eid-ul-Azha (Bakra Eid), the moon appears ten days ago while in Eid-ul-Fitr (sweet Eid), the moon appears a day before. Festivals in Islam are celebrated only after seeing the moon.

During the month of Bakri Eid, Muslims from all countries gather and perform Hajj (religious journey) in Mecca Medina (which is in Saudi Arabia), so it is also known as the Happy month of Hajj.

Why Bakra Eid is celebrated?

There is also a legend behind celebrating this day. It is believed that one day Allah had come in the dream of Hazrat Ibrahim ji, in which Allah asked Hazrat Ibrahim ji to sacrifice such an object which he loved more than his life. Hazrat Ibrahim had the most affection for his son, whose name was Ismail, and he loved his son very much.

Both types of Eid, Eid-ul-Fitr and Eid-ul-Azha (Bakra Eid) are celebrated with great enthusiasm in Islamic religion. Both these festivals hold an important place in the religion of Islam.