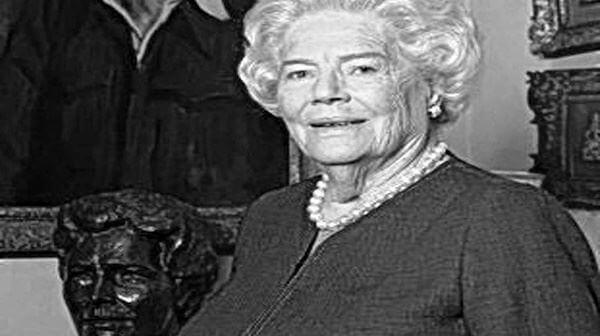 Mary Soames, Baroness Soames, was the youngest of five children of Winston Churchill and his wife, Clementine. She was the wife of Christopher Soames. Mary Spencer-Churchill was born and raised in Chartwell, and educated at Manor House in Limpsfield. She worked for the Red Cross and Women’s Voluntary Service from 1939 to 1941, and joined the Assistant Territorial Service in 1941, with which she served in mixed anti-aircraft batteries in London, Belgium and Germany, equivalent to Junior Gender Reached (equivalent) to Captain).

She also accompanied her father on several of his foreign trips as ad-day-camp, including his post-VO trip to Potsdam, where he met Harry S.W. Truman and Joseph Stalin. In 1945, he was appointed a member of the Order of the Order of the British Empire (MBE) in recognition of meritorious military services.

He served in several public organizations, such as the International Churchill Society, as a patron; Church Army and Churchill House; And chaired the Royal National Theater Board of Trustees between 1989 and 1995. He was the patron of the National Charitable Fund for the Elderly.

Mary was born in London in the same month, September 1922, in which Winston bought her beloved country house, Chartwell, on the banks of the Kentish Weald. He was the youngest of the oldest Churchill children ever (infant Marigold, who died in 1921), eight years younger than the oldest, Sarah. So she was brought up almost as an only child.

Her older siblings, Diana, Randolph and Sarah, knew a succession of homes, but Mary’s early years were spent entirely at Chartwells. There he developed a lifelong love for country life, especially in horses, and gardening. And, while her brothers and sisters had a succession of regimes, she was largely raised by Clementine’s young cousin, Mary Whitt, who joined the Churchill family as a nanny in Mary’s birth and for 20 years. are.

From 1939 to 1941, Mary worked with the ‘Red Cross’ and ‘Women’s Voluntary Service’. In 1941, she joined the ‘Assistant Regional Service’, the ‘Mahila Mandal of the British Army’ for the duration of the Second World. War. With the troop, he served in various anti-aircraft batteries in London, Belgium and Germany and was promoted to the rank of junior commander, equivalent to captain. Mary accompanied her father on many of his travels outside the country.

These visits included his tour of Potsdam (after the conquest in Europe Day), where he met both Harry S. Truman and Joseph Stalin. In 1945, in recognition of his meritorious martial services, he was made a member of the ‘Order of the British Empire’ (MBE).

He sponsored several public organizations, including the ‘International Churchill Society’ and the ‘National Friendly Fund for AZ’. In addition, Mary also served the ‘Churchill House’ and the ‘Church Army’. From 1989 to 1995, she was a part. Board of Trustees of ‘Royal National Theater’. Mary was made the ‘Dame Commander of the Order of the British Empire’ (DBE) in 1980 for public service, mainly in Rhodesia.